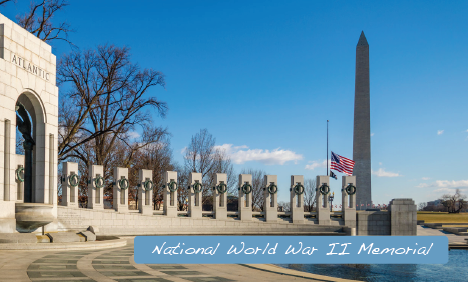 Saturday, May 23: Depart for Washington, DC
6:00AM: Motorcoach will depart from Lancaster, AC Moore store, located in the Lancaster Shopping Center on the Oregon Pike/Route
272 side of the store.

Arrive to our nation’s capital to join others in honor and thanks to the people past and present in our American Armed Forces. Enjoy
lunch on your own at Pentagon City Shopping Mall. After lunch, visit Arlington National Cemetery – no land in America is more sacred
than this square mile. It is America’s shrine to valor and sacrifice. This is the final resting place for President John F. Kennedy, Jacqueline
Kennedy Onassis, Robert F. Kennedy, Edward Moore (Ted) Kennedy, Audie Murphy, prizefighter Joe Louis, and thousands of soldiers
from every major U.S. war. While at the cemetery, you’ll have an opportunity to view the Changing of the Guard, an elaborate ritual
performed graveside at the Tomb of the Unknown Soldier. The cemetery is the former plantation and home of Civil War General Robert
E. Lee. Arlington House, Space Shuttle Challenger Astronauts’ Memorial, and monuments to nearly every major sacrifice that affected our
country are located within these 624 + acres. The Tomb of the Unknowns speaks of a nation’s debt to the many whose ultimate sacrifice
helped make a nation free. Afterward, check into Gaylord National Resort and Convention Center where your evening is free to enjoy
Military Band Performances at the National Harbor Stage and dinner will be on your own in any one of the dozen restaurants offering a
wide range of cuisine. Hotel: Gaylord National Resort and Convention Center, Washington, D.C.

Monday, May 25: National Memorial Day Parade & New Museum of the Army
This morning, after breakfast at the hotel, depart for America’s Team, a set of five life-like statues honoring the five branches of the U.S.
Armed Forces. Then, it’s on to The National Memorial Day Parade. This nationally televised parade is the largest of its kind in the United
States. It is held annually along Constitution Avenue in our nation’s capital to share the story of American honor and sacrifice from across
the generations. A boxed lunch is included. After the parade, depart for an exclusive pre-opening tour, movie, and dinner at the National
Museum of the United States Army at Fort Belvoir. The museum celebrates over 240 years of Army history and honors our nation’s soldiers
- past, present, and future – regular Army, Army Reserves, and the Army National Guard. (Breakfast, Lunch, Dinner)

Tuesday, May 26: Pentagon 9/11 Memorial Park, New Law Enforcement Museum & Depart for Home
Enjoy breakfast at the hotel this morning prior to checking out. Depart for the Pentagon 9/11 Memorial Park. The memorial honors the
184 victims of the September 11, 2001 attacks at the Pentagon. Then visit the United States Navy Memorial and Naval Heritage Center
which celebrates our rich maritime heritage. Enjoy lunch on your own at Union Station with free time to explore the shops. Next, visit
the National Law Enforcement Museum. This 57,000 square foot museum has 3 stories underground and more than 21,000 artifacts from
every era of law enforcement. Afterwards, depart for Central PA with appropriate rest and meal stops en route.

Limits on AAA Travel’s Responsibilities: The American Automobile Association, Inc., gives notice that all tickets and coupons are issued and delivered by them and all arrangements for transportation or conveyance, or for hotel accommodations are made by them as AGENTS, upon the express conditions that they shall not be liable for any injury, damage, loss, accident, delay, or irregularity which may be occasioned by reason or defect in any vehicle or through the act of default of any company or person engaged in conveying the passenger or hotel proprietor, or employee, or in carrying out arrangements of the tour, or otherwise in connection therewith. No carrier shall have or incur, any responsibility to any persons taking this tour, except its liability as a common carrier. The airline and/or steamship lines concerned are not to be held responsible for any act, omission, or events, during the time the passengers are not on board their plane or conveyances. The passage contract in use by the airline and/or steamship concerned when issued shall constitute the sole contract between the carrier and purchaser and/or passenger of these tours. The aforesaid American Automobile Association, Inc. can accept no responsibility for losses or additional expensed due to delay or changes of schedule, weather, strikes, war quarantines, or other causes. All such losses or expenses shall have to be borne by the passengers. AAA Travel Agency regrets that it cannot provide individual assistance to a tour/cruise member for walking, dining, or other personal needs. A companion must accompany persons needing such assistance.