Pump Prices are a Treat for Majority of Motorists

Pump Prices are a Treat for Majority of Motorists 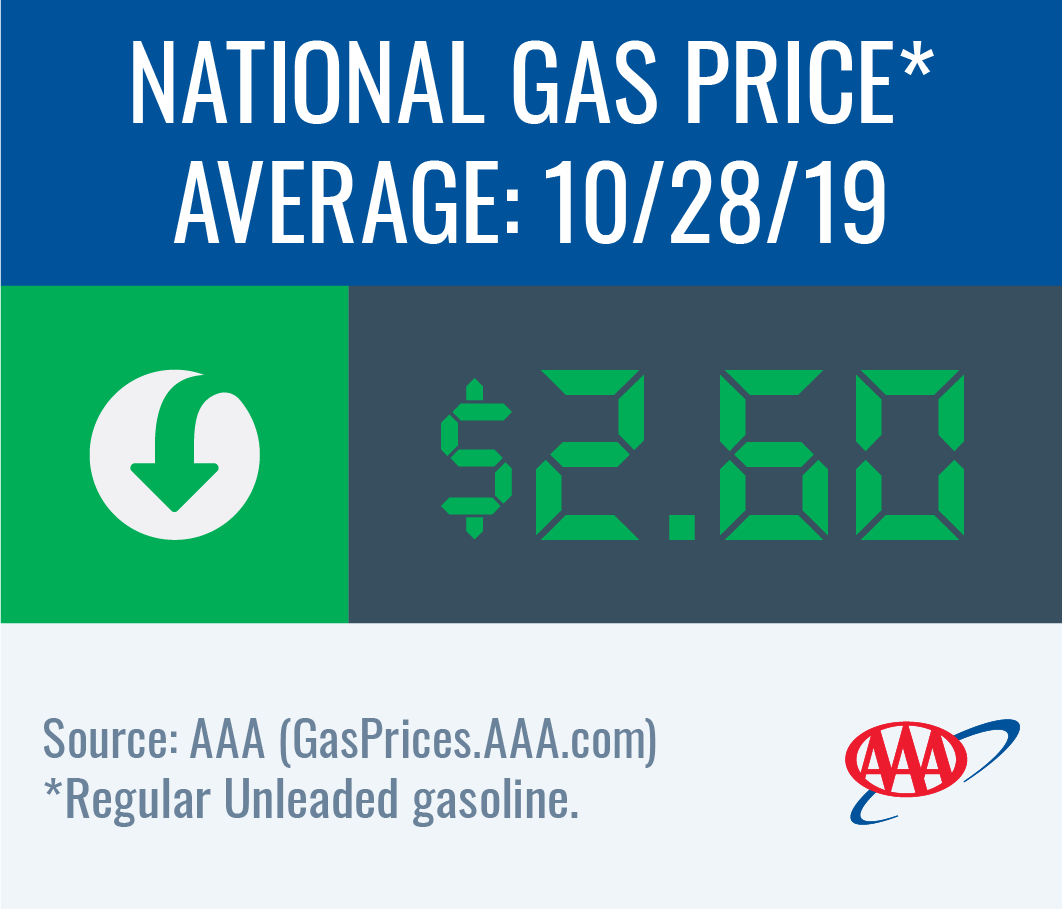 The national gas price average dropped by four cents on the week to $2.60, despite a jump in gasoline demand and a draw in gasoline stocks. That is the largest one-week decrease since gas prices started to increase more than six weeks ago. Today’s average is a nickel cheaper than last month and 21-cents cheaper than last year at this time.

“On the week, more than half of all states saw gas prices decrease,” said Jeanette Casselano, AAA spokesperson. “A handful of Great Lakes and Central states saw the largest declines at the pump, while pump prices primarily increased in the West Coast and Rockies regions.”

Refinery maintenance across the country continues, though utilization rates have increased in the last week. This could mean further declines to the national average in the weeks ahead if demand drops.

Pump prices in the West Coast region continue to fluctuate after a number of refineries in the region underwent planned and unplanned maintenance over the past few weeks. This includes the Olympic Pipeline, which can transport 300,000 b/d of refined products in the region. The pipeline reduced its capacity to undergo unplanned work last week. The pipeline is expected to operate at reduced capacity this week, which will likely put pressure on tight supplies in the region and cause prices to remain high. Additionally, regional power cuts may take some gas stations offline in areas impacted by the fires in California, potentially putting pressure on pump prices.

Four Great Lakes and Central states top the charts for the largest weekly decreases in the country: Indiana (-14 cents), Ohio (-14 cents), Michigan (-14 cents) and Kentucky   (-11 cents). Illinois (-6 cents) and Wisconsin (-5 cents) round out the top 10 list. All states in the region have cheaper week-over-week averages with state averages ranging from $2.89 to $2.63.

Across the region, state averages are cheaper on the week, month and year. Motorists in this region have the largest savings compared to last year. Pump prices range, on average, from 18 to 36 cents cheaper. On the month, pump prices are a nickel to 14 cents less.

Stocks drew by 2 million bbl in EIA’s latest report for the week ending Oct.18. At 48.5 million bbl, gasoline stocks sit at their lowest level since this past June, but are on par with levels from this time last year. The latest refinery utilization rate was recorded at 84%, the second lowest in the country. Motorists are likely to see typical volatility at the pump into early November as regional refineries undergo maintenance.

While all state gas price averages in the South and Southeast are cheaper on the week, motorists in the region are finding the real cost savings compared to last year. Three states in the region land on the top 10 list for largest yearly change: Louisiana (-32 cents), Florida (-31 cents) and Georgia (-30 cents). At a quarter less, South Carolina has the lowest year-over-year difference.

Gasoline stocks drew by less than a half million bbl on the week to now measure at 78.6 million bbl. Meanwhile, regional refinery utilization jumped up from 84.5% to 88%. In the week ahead, motorists are likely to see stable or cheaper gas prices.

Motorists in the Mid-Atlantic and Northeast states saw the smallest decreases in gas prices on the week of any region in the country. At most, pump prices only dropped three cents and only in three states: North Carolina ($2.39), Delaware ($2.35) and Virginia ($2.29). Most states in the region saw prices decrease by one to two cents or not drop at all. Washington, D.C. (+1 cent) was the outlier.

Compared to last year, Connecticut (-32 cents), Rhode Island (-32 cents) and New Hampshire (-31 cents) are among the top 10 states with the largest pump price difference. At 16-cents, Delaware has the smallest yearly change in pump prices. State gas prices averages in the Mid-Atlantic and Northeast region are also cheaper month-over-month, except in Washington, D.C. (+1 cent).

Gasoline stocks sit at 62.3 million bbl following a draw of 550,000 bbl in EIA’s latest data. Regional refinery utilization pushed up a percentage point to 60%. The relatively marginal week-over-week changes helped to keep fluctuations minimal. Despite sitting at a 5 million bbl gasoline deficit compared to last year at this time, the region is likely to see gas prices push cheaper or stabilize through early November.

Gasoline stocks declined by a marginal 120,000 bbl. Total stocks sit at 7.2 million bb as regional refinery utilization jumped 4% up to 85.6%. Gas prices have the potential to push cheaper in the week ahead if utilization remains high and stocks hold steady.