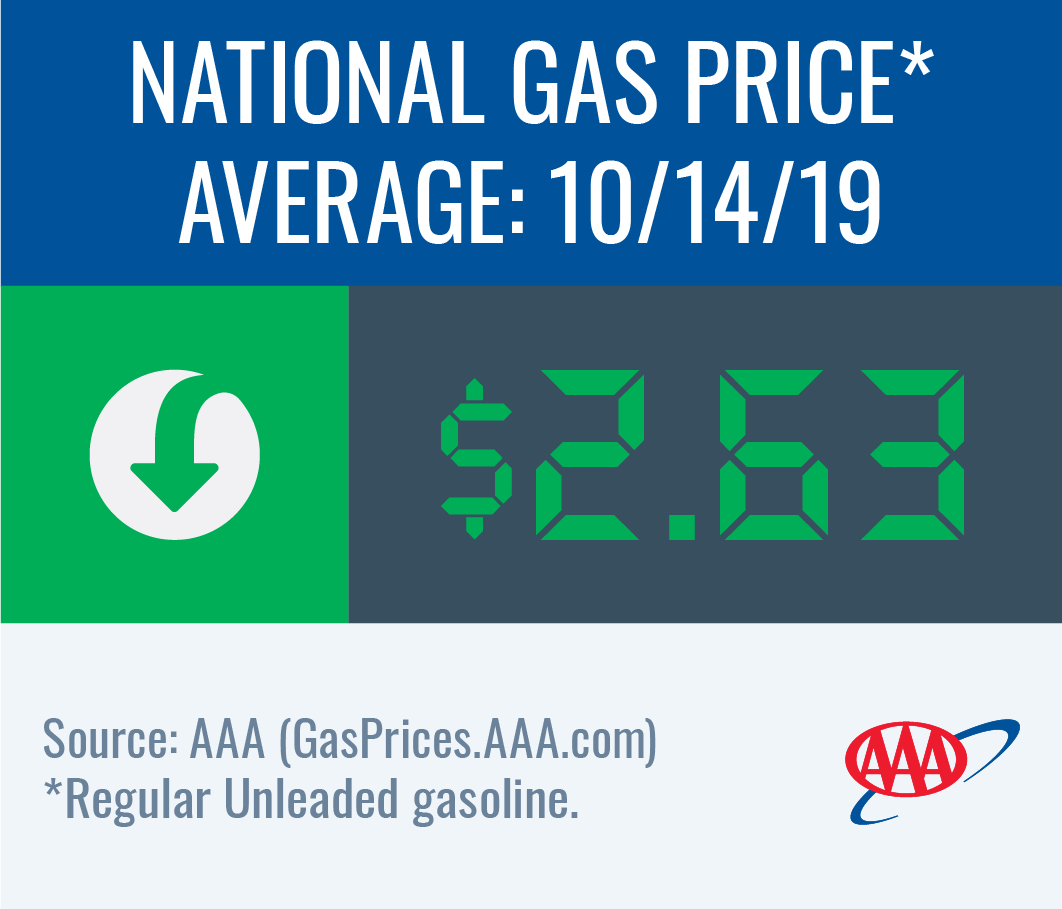 Despite an unseasonal spike in demand, according to the Energy Information Admiration’s (EIA) latest data sets, gas prices are decreasing for the majority of motorists across the country as crude oil prices (WTI) remain under $54/bbl. Today, the national average gas price is $2.63, which is two cents less than last week and 26 cents cheaper than last year, but six-cents more expensive than last month.

“The national gas price average has been gradually decreasing the past three weeks and we expect this trend to continue, barring any major industry or geopolitical events,” said Jeanette Casselano, AAA spokesperson. “But the real savings we’re seeing is when prices are compared to this same time last year. Drivers in some states are paying 40 cents less per gallon than they were last October.”

The largest weekly volatility with gas prices continues to happen in  West Coast states, but that could be tapering off. EIA’s data shows that the region’s refinery utilization jumped up 10% and gasoline stocks were relatively stable for the week ending Oct. 4, meaning there could be some relief in sight.

Most pump prices in the West Coast region have increased on the week. However, prices in the region appear to be stabilizing after a number of regional refineries experienced unplanned outages that reduced supply over the last few weeks.

Both regional refinery utilization and stock levels decreased in EIA’s latest report, but marginally. This will help to keep gas prices mostly stable in the week ahead, especially as fall quickly turns to winter in many parts of the region and gasoline demand decreases.

Three Great Lakes and Central states land on the top 10 list for largest weekly changes with both increases and decreases. Motorists in Michigan (-10 cents) and Kentucky (-7 cents) saw the largest drop in pump prices while those in Indiana (+5 cents) seeing the steepest increase. Ohio (+4 cents) was the only other state in the region to see gas prices increase.

Regional state gas price averages range from as expensive as $2.75 in Illinois to as cheap as $2.30 in Missouri. Both of these states land on the top 10 list for most expensive and least expensive state averages, respectively.

Gasoline stocks in the region remained mostly stable, seeing only a decline of 25,000 bbl. EIA data also showed that regional refinery utilization decreased 5%, down to 87%, which is an average rate compared to other regions in the country. If stocks see another dip this week, alongside the lower refinery rate, the region may see a little volatility in pump prices in the week ahead.

Gas prices are cheaper across all South and Southeast states on the week with the exception of Tennessee (+1 cent). The states with the largest decreases were: Florida (-6 cents), Georgia (-4 cents), New Mexico (-3 cents), Texas (-4 cents) and South Carolina (-4 cents).

With a build of 1 million bbl, the region recouped the previous week’s gasoline stock draw and pushed total levels back over 80 million bbl. Regional refinery utilization saw a small 1% decline. The significant stock build will help to push gas prices cheaper in the week ahead.

Motorists in the Mid-Atlantic and Northeast are all starting the work week with cheaper pump prices compared to last Monday. State averages range from $2.73 - $2.31, which are anywhere between one to three cents less on the week.

After two weeks of builds, the EIA reported a significant 1.4 million bbl draw the region, dropping stocks to 63.4 million bbl. More concerning is the drop in regional refinery utilization, which went from 67% down to 60% for the week ending Oct. 4. The refinery rate drop, which is likely due to planned and unplanned maintenance, plus the large draw in stocks could cause some volatility at the pump for motorists in the week ahead.

At the close of Friday’s formal trading session on the NYMEX, WTI increased by $1.15 to settle at $54.70. Crude prices increased last week after Iran announced that one of its oil tankers was struck, potentially by missiles, in the Red Sea on Friday. The incident adds to concerns that increased tension in the Middle East could lead to a disruption in global crude supply.

Crude prices also increased based on reports that OPEC and its partners could deepen production cuts next year in an effort to reduce supply, which would lead to higher prices. The current production reduction agreement of 1.2 million b/d is in effect until March 2020, but when OPEC and its partners meet on December 5 and 6 in Vienna, the group could decide to deepen the cuts. Additionally, crude prices rose after the U.S. and China announced a partial trade agreement at the end of last week. However, if trade tensions return, alongside increased tension in the Middle East, crude prices could slip this week.

In related news, EIA reported that total domestic crude inventories grew by 2.9 million bbl to 425.6 million bbl last week. They now sit 15.6 million bbl higher than where they were at this time last year.