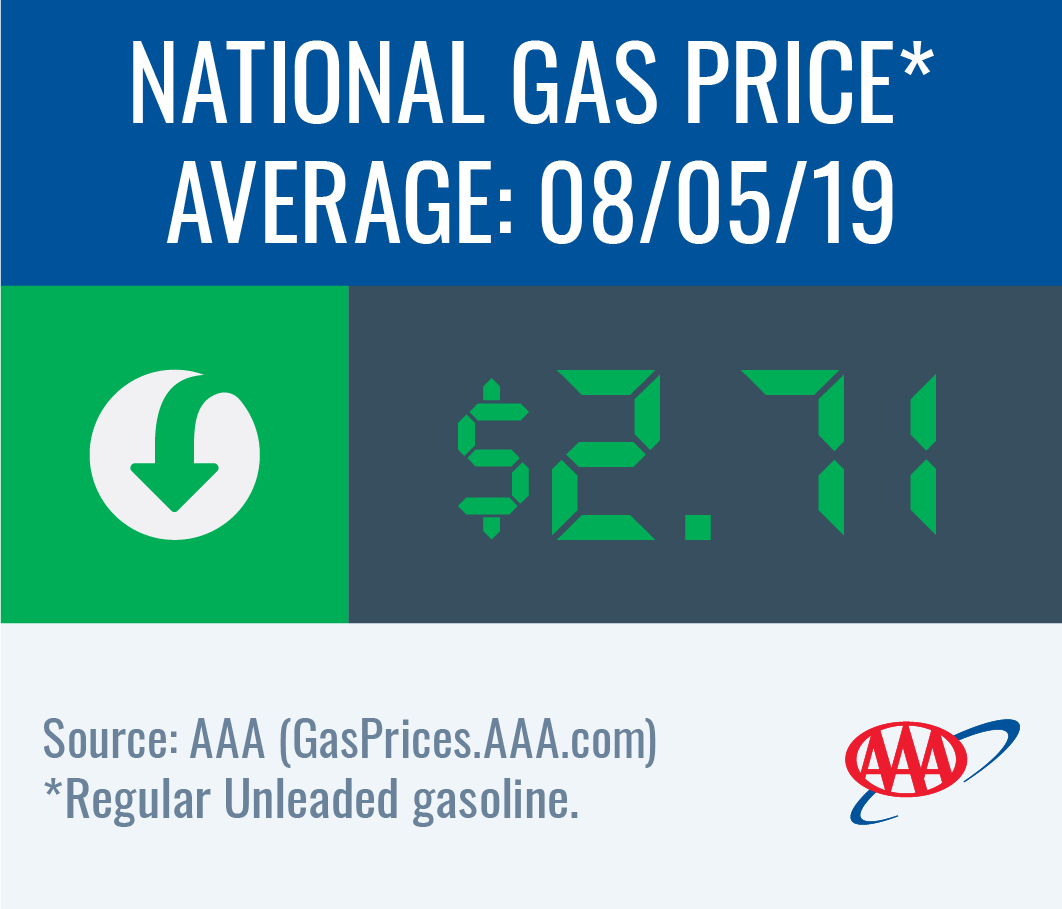 On the week, the average national gas price dropped by two cents to $2.71. This is less expensive than a week, a month (-4 cent) and a year (-15 cents) ago. Prices are cheaper as demand saw a small dip on the week, even though overall demand remains robust for the summer.

“While gas prices continue to drop, the rate at which they are decreasing has slowed,” said Jeanette Casselano, AAA spokesperson. “On the week, most states saw cheaper pump prices of only a few pennies and motorists can expect this trend to continue into early August.”

Today, motorists can find gas for $2.75 or less at 65% of gas stations across the country.

Motorists in the South and Southeast saw some of the largest declines at the pump and all states in the region have cheaper gas prices on the week. In fact, four states land on the top 10 list of largest weekly changes: Florida (-7 cents), Georgia (-4 cents), Texas (-4 cents) and South Carolina (-3 cents). This is the second week in a row that Florida and South Carolina have appeared on the top 10 weekly changes list.

In the region, motorists are seeing savings year-over-year ranging from 19 to 28 cents cheaper. Those savings are likely to only increase as gas prices push less expensive moving into August.

Regional refinery utilization jumped to 93.5% and gasoline stocks saw a 857,000 bbl build, according to Energy Information Administration (EIA) data for the week ending Jul. 26. This was the only region in the country to see stocks increase for the EIA’s latest reporting period. Total stocks measure at 83.8 million bbl which is a 5.5 million bbl surplus compared to levels at the end of July. The region’s strong measurement of gasoline stocks is helping to push gas prices cheaper and this trend should continue as August typically yields high regional utilization and stock levels for the region.

Pump prices are also trending cheaper compared to one month ago, with motorists in Michigan (-14 cents) seeing the largest monthly decrease in the region. Other Great Lakes and Central states with large month-over-month changes: Illinois (-13 cents), Kentucky (+9 cents) and Indiana (-6 cents). North Dakota (+6 cents) is this only state in the region with more expensive gas prices compared to a month ago.

For a second week, gasoline inventories dipped, and the draw was substantial at nearly one million bbl. The EIA also reports regional utilization declined from 99% to 95%. While pump prices pushed cheaper on the week, the lower stock and utilization levels could yield some price fluctuation in the week ahead.

Gas prices are as much as three cents cheaper on the week for motorists in the Mid-Atlantic and Northeast states, though a small number of states – fewer than five - saw prices remain stable on the week. Tennessee saw the largest decline.

The EIA reports gasoline stocks held on the week at the 59 million bbl mark while regional refinery utilization fell a percentage point to 76%. Analysts anticipate gasoline stocks to increase in August due to gasoline imports, which would assist in keeping gas prices cheaper in the coming weeks.

For the first time in a few months, motorists in Utah (+6 cents), Wyoming (+2 cents) and Montana (+1 cent) are paying more to fill-up. Meanwhile, Colorado (-2 cents) and Idaho (-1 cent) have slightly cheaper gas prices. With the price fluctuations, Utah ($2.91) and Idaho ($2.89) rank, respectively, as the eight and ninth most expensive gas averages in the country this week.

Regional refinery utilization remains above 100% for a second week while gasoline stocks saw a small draw to drop totals to 7.4 million bbl. This poises the region for cheaper gas prices, especially as demand is likely to drop along with the end of peak tourism season in the region.

Pump prices in the West Coast region are the highest in the nation, with most states in the region landing on the top 10 most expensive list today. California ($3.67) and Hawaii ($3.64) are the most expensive markets in the country. Washington ($3.28), Nevada ($3.23), Oregon ($3.13) and Alaska ($3.08) follow. Arizona ($2.77) is the only state in the region to fall off the list. Most state averages in the region have decreased on the week, with Alaska (-5 cents) seeing the largest decline.

The EIA’s recent report for the week ending on July 26 showed that West Coast gasoline stocks sit at 32.3 million bbl, growing by approximately 300,000 bbl from the previous week. The current level is nearly 150,000 bbl higher than last year at this time, which could help prices stabilize if there is any disruption in supply or gas demand increases in the region this week.

At the close of Friday’s formal trading session on the NYMEX, WTI increased by $1.71 to settle at $55.66. Crude prices mostly decreased last week after President Trump announced new tariffs on imports from China, furthering a trade war between the world’s two largest economies and oil consumers. Market observers are concerned that increasing tariff costs will likely reduce global demand for crude oil. If the trade tensions between the countries continue to increase this week, crude prices will likely decline further.