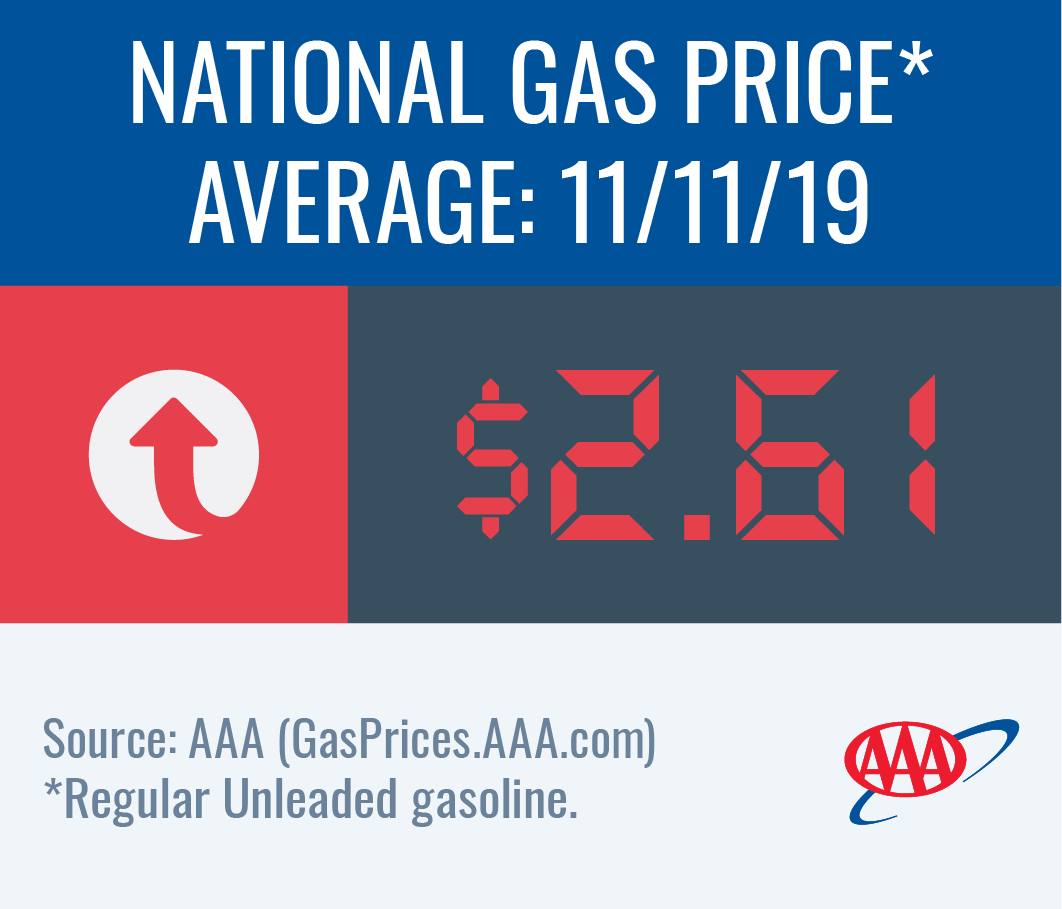 The latest Energy Information Administration (EIA) gasoline demand reading reflected the most fall-like numbers (9.1 million b/d) since the end of September. Despite lower demand, stocks drew by a significant 2.8 million bbl in part due to high exports. On the week, the national average increased one cent to $2.61.

“While most states are seeing more expensive gas prices on the week, the good news is that the majority of increases were nominal at a few pennies. In fact, only five states saw jumps of a nickel or more,” said Jeanette Casselano, AAA spokesperson. “Motorists are likely to see continued fluctuation at the pump, but not major increases in the week ahead.”

Compared to a month ago, state averages are about a 50/50 split in being either more or less expensive. The vast majority of motorists are seeing savings at the pump compared to November 2018, by as much as a quarter. Only six states are carrying averages more expensive than a year ago: California (+34 cents), Delaware (+12 cents), Nevada (+11 cents), Ohio (+8 cents), Arizona (+5 cents) and Oregon (+3 cents).

South Dakota ($2.50) was the only Great Lakes and Central state with stable  gas prices on the week. Motorists in Michigan (+10 cents) and Illinois (+9 cents) saw the largest pump price jumps on the week while four states saw prices decrease, but only by a penny: Wisconsin ($2.38), Nebraska ($2.46), Ohio ($2.48) and Minnesota ($2.49). All other states saw gas prices increase by one to three cents.

The latest increases at the pump can be attributed to the large decrease in regional gasoline stocks – from 47.9 to 46.5 million bbls in EIA’s latest report. Stocks have been decreasing weekly since the end of September. Regional refinery utilization rates, which increased minimally from 90.1% to 90.6%, likely helped keep most state increases on the smaller scale. If stocks are able to increase along with refinery rates in coming weeks, than motorists might see cheaper gas prices later this month.

Two states from the South and Southeast – Florida and Tennessee - land on the Top 10 list for largest weekly changes, but for a decrease and an increase, respectively, of a nickel. With the decrease, Florida saw the largest decline in gas prices in the country, but was not the only state in the region to see pump prices push cheaper. New Mexico’s ($2.52) average is a penny less expensive than last week. The majority of states in the region have more expensive gas prices on the week, with the exception of Georgia ($2.43), Arkansas ($2.30), Louisiana ($2.22) and Mississippi ($2.22). Averages in these states have held steady since last Monday.

With a 600,000 bbl draw, gasoline stocks measure at 78.4 million bbl in the region, which is the lowest level since early September, according to EIA data. In the week ahead, gas prices could push moderately more expensive, especially with the latest regional refinery utilization rate down nearly 3% to 87%.

Gas prices are fluctuating across the Mid-Atlantic and Northeast states with most motorists seeing penny increases. Delaware (+6 cents) and Maryland (+4 cents) saw the largest jumps in the region and rank among the top 10 states with the largest jumps in the country. For all other states in the region, prices only increased as much as three cents, with a handful of states seeing no pump price change on the week.

State gas price averages in the Rockies are mostly more expensive compared to last month, but are all cheaper than last year at this time, by as much as a 20 cents.

The latest EIA data shows that regional gasoline stocks and refinery utilization both dipped on the week. Stocks have drawn every week since Sept. 26, the latest draw from 6.9 to 6.7 million bbls. Refinery rates have fluctuated during this time. The most recent draw from 82.4% to 81.2%. The consistent decline in stocks has contributed to the increase in pump prices recently.

Pump prices in the West Coast region have mostly decreased on the week after the region underwent planned and unplanned refinery maintenance that caused prices to spike over the past month. Reduced supply in the region, amid robust demand, put pressure on pump prices, but the pressure continues to decrease as a result of imports and increased production from regional refineries.

At the close of Friday’s formal trading session on the NYMEX, WTI increased by nine cents to settle at $57.24. Crude prices increased last week as a result of increased optimism that China and the U.S. – the world’s two largest crude consumers – are continuing to resolve ongoing trade tensions. The trade conflict had previously sparked market fears that global crude demand would suffer as a result of increased tariffs between both countries. If trade relations between the U.S. and China continue to show improvement this week, crude prices may continue to increase.