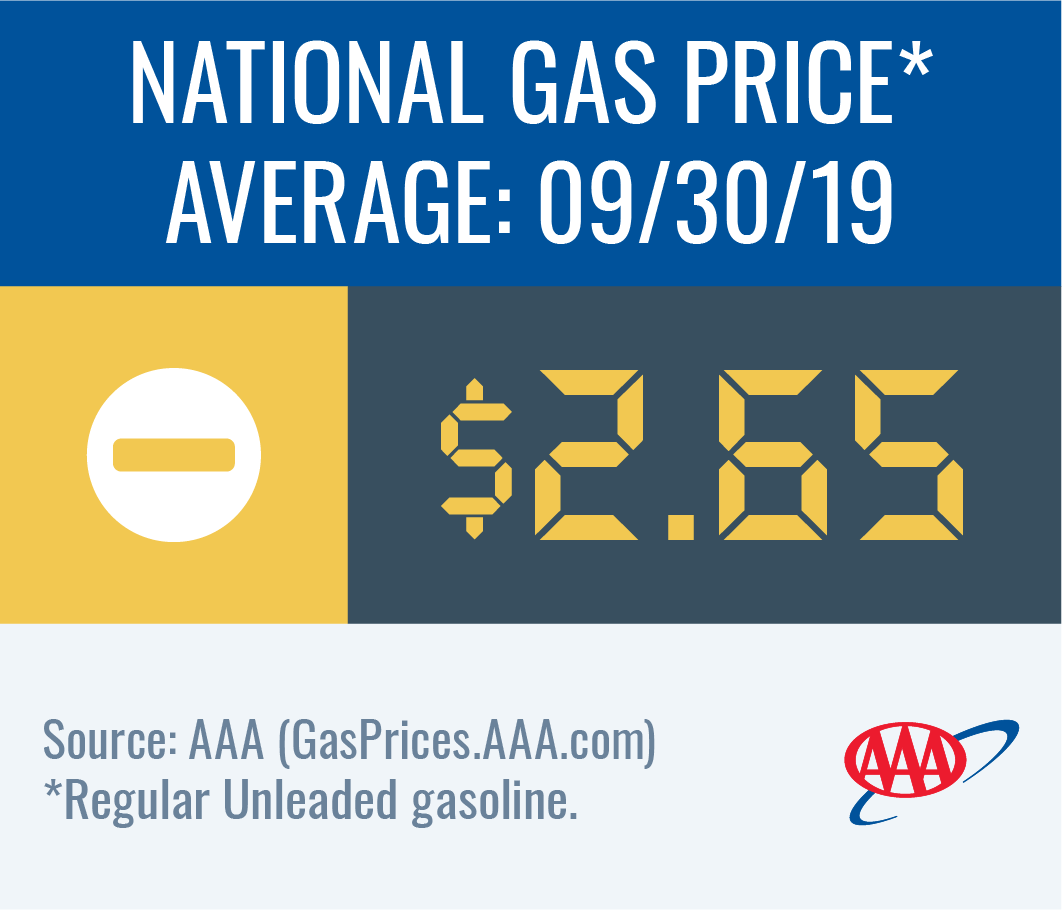 Two weeks after attacks on major Saudi Arabian oil facilities, the majority of Americans are starting to see signs of gas prices trending cheaper. While the national average may have only decreased by a penny on the week, 10 states saw pump prices decline by a nickel or more.

“Crude oil prices have dropped close to where they were right before the drone attacks on the Saudi oil facilities,” said Jeanette Casselano, AAA spokesperson. “This is helping to push gas prices cheaper in most of the country. Americans can expect this trend to continue, except for those filling-up on the West Coast, where refinery disruptions are causing spikes at the pump.”

On the week, all West Coast region states saw prices increase with California (+28 cents) seeing the largest spike, which drives the state average to $4.02 and is likely to push more expensive this week.

Today’s national gas price average of $2.65 which is the same price as last week, and is seven cents more expensive than last month, but 22-cents cheaper than a year ago.

Pump prices in the West Coast region have increased on the week, following a number of refinery outages that have tightened supply in the market. Robust demand is contributing to price increases, and prices are unlikely to subside until supply is strengthened. California ($4.02) and Hawaii ($3.67) are the most expensive markets in the country. Washington ($3.23), Nevada ($3.28), Oregon ($3.10), Alaska ($2.96) and Arizona ($2.91) follow. California (+28 cents) saw the largest increase, followed by Nevada (+13 cents).

The Energy Information Administration’s (EIA) report for the week ending on September 20, showed that total West Coast gasoline stocks decreased significantly by 1.5 million bbl to 27.1 million bbl. This level is approximately 800,000 bbl lower than this same time last year. Tight supplies will continue to cause prices to increase, but imports and increased deliveries from nearby states are expected to help to ease increasing prices.

Regional gasoline stocks increased by almost 200,000 bbl to total 7.7 million bbl. Meanwhile, regional refinery rates declined by 5% down to 91%. While that is the lowest refinery rate since early May, stock levels are at their highest of the year. This will likely keep gas prices stable in the week ahead despite the lower refinery rates.

Motorists in the Great Lakes and Central States saw some of the largest pump price drops on the week with Ohio (-15 cents), Michigan (-12 cent), Kentucky (-11 cents), Illinois (-9 cents), Indiana (-7 cents), Iowa (-7 cents) and Minnesota (-6 cents) all landing on the top 10 list for largest weekly declines. All states in the region saw prices decline by at least two cents since last Monday.

Gasoline stocks drew down to 50.9 million bbl, which is a 1.5 million bbl year-over-year deficit. Stock levels could continue to decline. The latest EIA data shows the regional refinery utilization dropped 4% to 92% for the week ending Sept. 20. This combination could cause some fluctuation in gas prices in the week ahead, potentially pushing gas prices more expensive.

Compared to one month ago, gas prices are more expensive for all motorists in the region. New Mexico (+16 cents), Georgia (+14 cents), Alabama (+11 cents), Mississippi (+11 cents), Louisiana (+10 cents) and Tennessee (+9 cents) rank among the top 10 states with the largest monthly increases in the country.

For a second week, gasoline stocks increased – this time by a substantial 1.8 million bbl. The EIA reports total stocks at 80.3 million bbl, a healthy level for this time of year which should help to keep pump prices mostly stable.

All states in the region saw pump prices push cheaper on the week with Delaware (-8 cents) seeing the largest decline. However, the majority of the Mid-Atlantic and Northeast states saw small declines of just a penny or two. State gas price averages range from $2.35 - $2.77 in the region.

While all gas price averages in the region are cheaper year-over-year, that is not the case for month-over-month pump price differences. Most state averages are cheaper compared to last month, however, many are  paying more: Delaware (+9 cents), Maryland (+7 cents), North Carolina (+5 cents), Pennsylvania (+4 cents), Virginia (+3 cents) and West Virginia (+2 cents).

Gasoline stocks increased by 2 million bbl, pushing levels to 64.3 million in EIA’s latest report. Meanwhile regional refinery utilization saw a 1% increase to 68%. The stabilization in refinery utilization alongside the large increase in stocks likely means most states in the region will see gas prices hold steady or decrease in the week ahead.

At the close of Friday’s formal trading session on the NYMEX, WTI decreased by 50 cents to settle at $55.91. Oil prices were mostly mixed last week after EIA’s weekly report revealed that total domestic crude inventories grew by 2.4 million bbl, bringing the total 419.5 million bbl. The current level is 23.5 million bbl higher than where it was at this time last year. The higher level has kept prices in check as concerns that global crude demand may be impacted by the ongoing trade war between the U.S. and China.

Additionally, crude prices have also been shaken as a result of market concerns that global supply could be reduced due to escalating tension in the Middle East. Crude prices increased moderately last week after the U.S. Department of Defense said it would deploy radar systems, Patriot missiles and about two hundred personnel to bolster Saudi Arabia’s defenses after an attack on two of its oil facilities earlier this month. If EIA’s report shows another crude inventory build, crude prices could end the week down. However, any escalation in the U.S.-China trade war or tensions in the Middle East could see them spike.